A once in a lifetime chance! 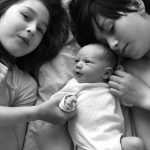 It all started with copsac – we knew nothing about stem cells back in 2010 when I was expecting our son, Bertil. We were invited to join the Copsac study which was to show if fish oil and vitamin D in pregnancy had an effect on whether the children got asthma and allergies.

As part of the Copsac study, blood stem cells were collected at birth when we got Bertil and they are stored at DTU.

When I was expecting Bertil I did not have much knowledge about stem cells and unfortunately I did not get to read about it at that time. Shortly after Bertil’s birth, I became pregnant with Nola. I immediately investigated whether Copsac still included subjects, because then I would like to join again so we could also collect Nola’s stem cells at birth, but they did not. Both my husband, Mikael and I thought it was difficult, and ethical dilemma, that we did not collect stem cells from Nola – we did not know that it was an opportunity to do it privately. The thought that maybe in the future we could heal or help our one child and not the other was really hard for us to deal with. At the time, we did not know that this was not the case at all.

Now I am pregnant with child number three and this time both Mikael and I have thoroughly studied the storage of stem cells from the umbilical cord.

And we are in no doubt. In our family, there are several important reasons for our choice. In addition to the reasons that we could quickly read about on Cellaviva’s website.

When we got in touch with Cellaviva and got thorough information, it dawned on us how difficult it can be to find a suitable stem cell donor. We had no idea.

My mother is originally an adopted child from Korea, probably with Korean mother and African-American father.

My father is of Jewish descent from Austria – for me this means that if I were to need a stem cell transplant, it would be almost impossible to find a suitable donor. Now we build our own family depot and it at least gives me a feeling of calm, because the chance of a match between little brother and me is reasonably large and because we store umbilical cord cells and not bone marrow cells, there most likely do not have to be a 100% match.

– both asthma, allergies and an intestinal disease. The more we read about all the research in the field, the greater our hopes that Mikael may be helped in the future.

In fact, I think all families should know that it is an option to have stem cells collected.

For us, it was something of a coincidence that we got to hear about Cellaviva. Considering that there is only one chance in life to get stem cells collected from the umbilical cord, I think it is so important to spread information. I talk about stem cells from the cord in all the places I can and I experience both great ignorance and great curiosity from others, it is as if they who listens get an Aha experience. A very common phrase from those I talk with is: “I really wanted to know that when I was pregnant, then I would definitely have chosen it, and now it’s too late”.

When we spoke to a midwife from Cellaviva, we found that it was not at all as extensive, cumbersome or expensive as we thought.

We found that we could pay in installments, that our children could most likely be matched with the cells from little brother and that it was not a problem to have stem cells collected at home birth, water birth or any other birth. We have chosen to collect the stem cells from both his blood from the umbilical cord and from the umbilical cord tissue itself. There is so much research into the use of stem cells for disease treatment and we are pretty sure that the body’s own medicine is better than many chemically produced drugs.

We have received the Cellaviva box, I have filled in the health declaration that I have received by email and I know when I should call Cellaviva’s hotline so that my Cellaviva midwife can come and participate in the birth and ensure our family a stem cell depot.

Is there anything we can help you with?

We are available by phone and email if you have questions about anything regarding our process, stem cells, prices and ordering.

Necessary Always Enabled
Necessary cookies are important for the website to function properly. This category includes only cookies that ensure the basic functions and security functions of the website. These cookies do not store any personal information.
Non-necessary
Some cookies are not necessary for the website to function and are used specifically to collect the user's information through analysis, advertisements, other embedded content, they are called unnecessary cookies. It is mandatory to obtain the user's consent within these cookies run on your website.
Advertisement
Advertisement cookies are used to provide visitors with relevant ads and marketing campaigns. These cookies track visitors across websites and collect information to provide customized ads.
Analytics
Analytical cookies are used to understand how visitors interact with the website. These cookies help provide information on metrics the number of visitors, bounce rate, traffic source, etc.
Functional
Functional cookies help to perform certain functionalities like sharing the content of the website on social media platforms, collect feedbacks, and other third-party features.
Others
Other uncategorized cookies are those that are being analyzed and have not been classified into a category as yet.
Performance
Performance cookies are used to understand and analyze the key performance indexes of the website which helps in delivering a better user experience for the visitors.
SAVE & ACCEPT
Powered by